A second review of "Jacob Two-Two" and some postings

CM Magazine, a resource for librarians, has just published its advance review of "Jacob Two-Two on the High Seas." The reviewer, Andrea Galbraith, writes: "Much of the originality of the story comes from the theme of treasure being in the eye of the beholder....a highly readable book...it would work well as a read aloud or for solo reading. Highly recommended."

There have also been a few postings on the Globe & Mail and the Quill & Quire websites questioning the decision of adding to the series in the first place. The general opinion of these posters is that Richler's name is being exploited and his work being taken advantage of or tampered with. Other responses disagree.
I'm not at all surprised that some people don't like the idea. When first approached, I had some of these same thoughts. I asked myself: would I want someone to write another "Kaspar Snit" book? I didn't come up with any easy answers but I did decide that it ought to be the Richler family's decision. They, after all, are the ones who knew Mordecai best. And Mordecai passed the rights on to them. (Perhaps it should be remembered that Mordecai himself was happy to "exploit" his own books, allowing them to be adapted for film, television, and theatre. Some of these adaptations are very good but others are quite poor. And who remembers the musical based on "Duddy Kravitz" that closed before reaching broadway?) For me, the question was whether I felt I could do justice to the characters and series. And whether I wanted to do it. I answered "Yes" to both.
Of course people have every right to disagree. I'm happy to read their opinions, especially when they are well expressed. The question might be an interesting one for students to think about along with the notion of how authors "own" their characters and creations. I would like to say, however, that those who write that Richler's own work has been "tampered" with are simply wrong. No one has altered a single word he wrote or changed any of his books. My own book is clearly marked: it is a new work, written by me.
And if you read it, I hope you enjoy it.
Posted by Cary at 9:12 AM No comments:

First Review of "Jacob Two-Two on the High Seas"

Quill & Quire, the Canadian book-trade magazine, has just published an advance feature review of my upcoming children's novel, "Jacob Two-Two on the High Seas." Here is a sample:

"Fagan is a pro at writing entertaining and intelligent fiction aimed at the younger set. His Kaspar Snit series is infinitely inventive fun, displaying an affinity for offbeat scenarios and a ready wit that goes well with Jacob's universe. ...children and adults should find much to enjoy in Jacob's newest. Fagan has taken on responsibility for the series admirably, and the possibility of more Jacob adventures should make every young reader very happy."

Naturally, I'm very pleased by the review. (Actually, the primary emotion I feel on reading a positive review is relief.) But what I found most interesting in Corey Redekop's thoughtful consideration were his comments about the "darker shadings" and more frightening "Dickinsian" qualities of the first book that Richler wrote, Jacob Two-Two Meets the Hooded Fang.

While I'm at it, I'd like to send best wishes to the new editor of the magazine, Stuart Woods. It's a hard job to take on, after the death of Derek Weiler, who was so admired by people in the book trade. But Quill & Quire has become an indispensible journal and I'm sure Stuart will continue to build on its strengths.
Posted by Cary at 7:44 AM No comments:

A first look at the new novel 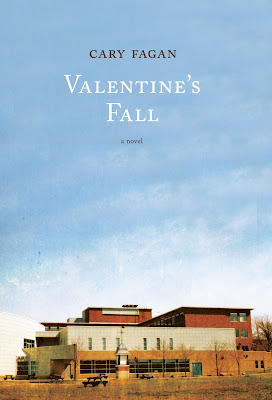 "Well, it's been a long wait--for me anyway. My new novel will be published early in the fall by Cormorant Books. I'll just say here that it's about high school, middle age, Toronto, the suburbs, love, family, loss, and bluegrass music. Here is a look at the cover, designed by Angel Guerra. It seems only fitting that Angel did this one, since he also designed the cover of my novel "Felix Roth" and Felix, a couple of decades older, makes an appearance in the new one."
Posted by Cary at 1:57 PM No comments: