'Thing-Thing' has just been nominated for two national awards, both administered by the Canadian Children's Book Centre. One is the Marilyn Baillie Picture Book Award ($20,000) and the other is the big one, the TD Canadian Children's Literature Award ($25,000). It's an understatement to say that I'm thrilled by the nominations--for me and for Nicholas Debon, the illustrator. A lot of people work very hard over the year to make these awards happen and I'm grateful to them. The winners are announced at a fancy-shmancy evening in November so I better dust off my good clothes.
Posted by Cary at 2:59 PM 1 comment:

the new look of "Valentine's Fall" 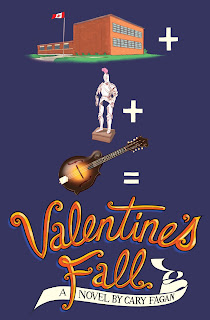 Here is the new cover design for "Valentine's Fall." The illustrations are by Nick Crane. It sure is different from the first design, and from any other cover I've had. But I think it captures some of the spirit of the book. And it's refreshing to try something different.
Posted by Cary at 7:41 AM 1 comment: